skip to main | skip to sidebar

The battle had already started with the clumsy attempts by Livingstone's team to smear Boris Johnson before he had even won the race to be the Conservative candidate for Mayor of London.

But now it is official and Londoners have a real choice, between the hypocritical, bitter and divisive reactionary who taints our capital city by inviting terrorist sympathisers and human rights abusing left wing friends to visit; and an intelligent and capable man who will be accountable, careful with taxpayers' money, work tirelessly for ALL Londoners and champion the city and its people here and abroad.

Vote for BORIS JOHNSON for Mayor of London.
Posted by Tony at 9:59 am 7 comments:

These two fine figures of health and fitness, Len Duvall and Ken Livingstone have set themselves up as arbiters of what is attractive and what is healthy: 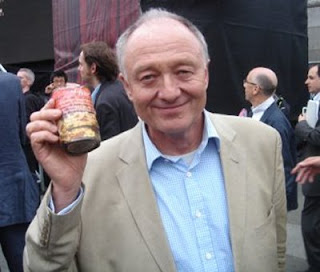 And why are they straying somewhat beyond their respective remits of chairing the Metropolitan Police Authority / the Greater London Labour party, and hobnobbing with extremists being Mayor of London? Because London Fashion Week is nearly upon us.

Duvall thinks "young girls [are] starving themselves to death because of the lead being given by the fashion industry". Care to provide the figures, Len, or are you, as I strongly suspect, making it up as you go along? And not a hint of hyperbole either, I'm sure. Belief in free will is so terribly old fashioned, isn't it?

As to Livingstone, he goes that wee bit further and comments "I would be quite happy to ban under size models throughout the entire fashion world.“ A lot of the women on catwalks look disturbing. The idea that anything about this is attractive is just bizarre". And how do you look to them?

Yes, some models are thin. Then again there are plenty of people in the public eye who are not, and it ill-behoves anyone to make a judgement on what people should or should not find attractive, still less for a politician to attempt to wreck the ability of someone to maker a living based on their appearance. Insert the name of your preferred racial, cultural etc group in the place of 'under size' to get the full impact. Ideals of beauty vary greatly both across the ages and across cultures - I doubt that the average Samoan would find a Somali attractive, or vice versa. Given that the average Briton is bigger now than 20 years ago, I cannot help but think that the impact of 'size zero' models in shaping the popular consciousness has been less than enormous.

Always supposing that one's morphology is entirely in one hands, can we look forward to Duvall & Livingstone coming down like two tons of bricks on body builders, athletes, folk with orange tans, long hair, short hair, tattoos, piercings, thick ankles, split ends, acne or whatever else they consider "bizarre" for others to find attractive?

Maybe I am being naive, but the concept of 'a consultation' suggests that something is being investigated without there being pre-ordained aim. Not, however, when it comes to City Hall and the Mayor of London.

The 'consultation' is about an exciting new class war attack on folk fortunate enough to drive large and / or luxurious cars. Not that it is phrased thus, it is all about CO2 emissions, which Livingstone has determined to have caused the recent floods. Uh-huh.

There is, as one would expect, some rather poor reasoning at work in the press release, and some fairly masterful sleights of hand. The attack on the owners of these cars is justified by their only being driven by '8% of Londoners'. Given that the congestion charge zone covers Westminster and K&C, the honest figure to dig out would be the percentage of these chariots of CO2 owned by people living in those boroughs, but as the average Westminsterian / Kensingtonian probably drives something a little further up the food chain than a 10 year old Toyota that would not allow him to produce a figure of 8% for the rest of us to place, metaphorically speaking, in the stocks and pelt with unread copies of 'The Londoner'. Although doubtless he would love to do that too.

And it is 'argued' further, "Some of the worst examples produce two or three times as much greenhouse gases as the average family car". Per mile? Per day? Per whatever? If I have been taxed for the privilege of driving a car in town, having once paid the tax there is absolutely no disincentive to spend all day in it, rather than just use it for the originally planned scoot to the shops.

And there's more: "The proposals are part of the Mayor's strategy to do everything possible to reduce pollution and London's contribution to climate change - a top priority as the recent catastrophic weather has brought home".

"Everything possible"? Given that by Livingstone's own admission less than half of the non-aviation transport produced CO2 comes from cars, what is he doing about his ghastly bendy buses, for instance? And that is before he targets people for breathing out, plants for photosynthesising, etc etc.

And then compare this statement: "The Mayor will keep an open mind on the proposals until he has considered the responses to the consultation".

With this: "The highest CO2 emitting cars - like some of the so-called Chelsea tractors, high powered sports cars and luxury executive cars - can produce twice as much carbon dioxide emissions as the kind of car driven by the average Londoner. By proposing these changes to the congestion charging scheme we are encouraging people to take into account the impact on the environment of their choice of car".

Any bets on Livingstone deciding not to charge extra for some vehicles? I'll happily take any money anyone wants to stake.
Posted by Croydonian at 12:03 pm 11 comments:

London Mayor Livingstone Ken has really outdone himself, with flagrant hypocrisy with his latest "green" gimmick.

As part of his "DIY Planet Repairs" campaign launch earlier today, he revealed a very large LED screen displaying a counter, which is counting the quantity of CO2 emissions being produced, and wasted, by Londoners.

Some of the ideas to for Londoners include switching off lights, and unplugging electrical items. However, the question has to be asked "how much CO2 is being produced to power this counter".

I would bet that if Ken switched his CO2 counter off, there would be a lot less CO2 produced. He really hasn't got a clue when it comes to green issues, every attempt he makes ends up producing higher emissions.
Posted by Anonymous at 6:13 pm 4 comments:

By their friends shall ye know them

From the other side of the pond we hear of the latest sinister antics of Livingstone's good friend, El Presidente Hugo Chavez of Venezuela. Like our own unreconstructed Communist in London, Chavez intensely dislikes his opponents having a voice and a platform from which to use it. Democracy is inconvenient like that.

Unlike Livingstone, Chavez is able to use ruthless tactics to suppress the opposition's ability to argue their case and expose failings, human rights abuses and a naked thirst for power. Livingstone is limited to hurling abuse. So Chavez spins the line that all opponents must therefore have been involved in a coup attempt against him and takes draconian steps to silence them by removing the platform.

This time it is the independent TV station RCTV that is about to be silenced as Chavez has refused to renew its licence. Instead he will replace the station with... a publicly funded one - i.e. a government propaganda channel.

Marcel Garnier, RCTV's managing director, told a crowd of cheering protesters in Caracas that Mr Chavez was trying to "topple the country over the precipice of totalitarianism where not even his own supporters can express their opinions".

I could not have put it better myself. I wonder what Livingstone thinks about all this. Perhaps he prefers the "quiet diplomacy" approach of his friends in South Africa and will tell Comrade Hugo that his actions are not really on. Or, most likely, he thinks RCTV has had it coming and deserves all they get for daring to oppose such a visionary. Either way, there will be hugs, backslapping and tributes next time they meet - assuming Hugo is not too busy that is.

Today Livingstone is hosting 'The state of London Debate', with the aim being "a chance to discuss with London’s policy makers the reasons behind London’s success and how it can remain successful in the future".

I have had a look at the speakers, all 83 of them, and done a rough and ready sorting into politicians, wonks, lobbyists and the like.

This is what I've divined:

Given that "Londoners have always known they live in a great city – a place where people from around the globe come to do business and enjoy all that the capital has to offer. Now an official report identifies London as one of the most successful cities in the world" what chances are there that this particular set of people is going to have much insight into the successes of the City of London - the engine of the London economy?

Posted by Croydonian at 1:03 pm No comments: